Status Epilepticus and Hydrocephalus in a 2-Year-old Female

While Mycobacterium tuberculosis (MTB) infections remain highly prevalent throughout the world, with approximately 130 cases per 100,000 people and a constant increase in the number of new or relapsed cases1, in the United States (US), a downward trend is reassuring. In 2018, the number of pediatric MTB infections reported in the US was 372, or 4.1%, for children younger than 14 years-old (almost half being diagnosed in children below five years), and 874, or 9.6% for the children 15 to 24 years of age. In children, the rate of extrapulmonary infections was estimated between 17-25% in certain European studies 2,3 and 32% in the US.4 Among this US cohort of children less than 5 years-old, 80% were US-born and 64% had at least one foreign-born parent. The 2018 Centers for Disease Control and Prevention report identified that 3.8% of the extra-pulmonary infection cases were tuberculous meningitis (TBM), all ages accounted for.5 For the pediatric population specifically, TBM with or without tuberculoma, was estimated around 20%6 in high-prevalence areas; conversely, in the US the incidence is expected to be closer to 1-2%.7

A previously healthy 22-month-old female was transferred to our intensive care unit in status epilepticus. Over the course of the prior three weeks, a presumed benign viral illness had progressed to persistent febrile illness, then managed with amoxicillin followed by amoxicillin and clavulanate. Ultimately the patient exhibited neurological symptoms represented by behavior changes and focal seizure activity. Upon arrival, she was heavily sedated and intubated. Her physical exam and vital signs were unremarkable. Antibiotic therapy with cefepime, vancomycin and acyclovir were initiated.

Following initiation of anti-tuberculous medication (isoniazid, pyrazinamide, rifampin and amikacin) we noticed worsening central nervous system (CNS) pathology (Figure 2A, 2B, 2C, and 2D). It was not until the third week of therapy that the patient become more stable, allowing extubation and de-escalation of the antiepileptic regimen. Subsequently, besides placement of a ventriculo-peritoneal shunt and a gastrostomy tube, the clinical course was uncomplicated. She completed 12 months of anti-tuberculous therapy (four drugs the first 2 months followed by 10 months of isoniazid and rifampin) without recovery of neurological functions. The main sequela were the severe neurological disability represented by pyramidal tract and basal ganglia involvement and epilepsy requiring anti-convulsive medication.

Although a rare encounter, TBM remains an ominous presentation of MTB infection. Children under the age of five, and those younger than two in particular, have the worse prognosis given their susceptibility for disseminated infection. Additional risk factors for severe presentations include HIV co-infection8, malnutrition, recent measles infection, and immunosuppressive states.9 The hydrocephalus, a typical radiological finding in TBM, has been found to be a poor prognostic factor by itself.10 The neurological manifestations vary from a classical meningitis picture to cranial nerve deficits, seizure disorder and different degrees of altered mental status.11, 12, 13

In older children, a subtle prodrome with behavioral changes and headache is common. Tuberculous meningitis can develop in the context of miliary tuberculosis, associated or not with tuberculoma, and as an independent entity as well.6

The presence of altered mental status in a child who received prior antibiotic therapy usually raises concerns for a complicated bacterial infection of the CNS. The increase in the intracranial pressure, cerebral edema, cerebrovascular anomalies, extra-axial fluid collections, brain abscesses, seizures, focal deficits, and hydrocephalus are all neurological complications of bacterial meningitis. In the right epidemiologic context, TBM needs to be included in the differential diagnosis.

A CSF analysis revealing moderate pleocytosis with lymphocytosis, proteinorachia between 100-500 mg/dL and very low glucose levels below 45mg/dL or a CSF:plasma glucose ratio <0.5 are typical findings in TBM. A paradoxical response characterized by increase in CSF neutrophil count has been described once therapy with anti-tuberculous drugs has been initiated. In rare situations, a normal CSF analysis can be observed. Identification of acid-fast bacilli (AFB) in the CSF by both staining and culture remains the most important and widely available method to diagnose CNS infection, especially in the era of increasing rates of multidrug resistance. Typically, pauci-bacillary, CSF samples result in low microbiological confirmation rates by either Ziehl-Nielson staining or culture technique in the Lowenstein-Jensen medium.11,14 Consequently, multiple samples should be collected in order to increase the detection rate of the MTB. Access to a molecular assay decreases the need for higher CSF volumes from 5-6 ml to only 2-3 ml.15 The GeneXpert method has an overall sensitivity of 56% although, CSF centrifugation may optimize its performance to 72-77%.14,15 Other diagnosing methods such as antibody and antigen detection are not employed in the U. Sserology cannot differentiate acute from previous infection and cross-reactivity when other mycobacteria species have been documented.

Another piece of the puzzle facilitating the diagnosis of TBM for our patient was the positive IGRA. The severe clinical presentation was most likely responsible for the anergic tuberculous skin test. A recent meta-analysis revealed that IGRA performance from either blood or CSF was 77-78% sensitive and 61-88% specific.16 However, similar to the molecular assays, the negative predictive value of these assays remains low, and they should not be used to rule out TBM. In comparison, the sensitivity of the TST is even lower (44% in a 2005 study), and it doesn’t seem to be influenced by the nutritional status or Bacillus Calmette-Guérin vaccination.17

Imaging studies such as computed tomography and magnetic resonance help with the diagnosis by identifying pathognomonic intracranial changes associated with TBM12 and help predict the outcome. The most common findings are basal meningeal enhancement (Figure 2A and 2B), infarctions in the supratentorial brain parenchyma and brain stem (Figure 2C and 2D), and hydrocephalus and are encountered in 80-90% of children with TBM, even during the first stages of the disease.6,12 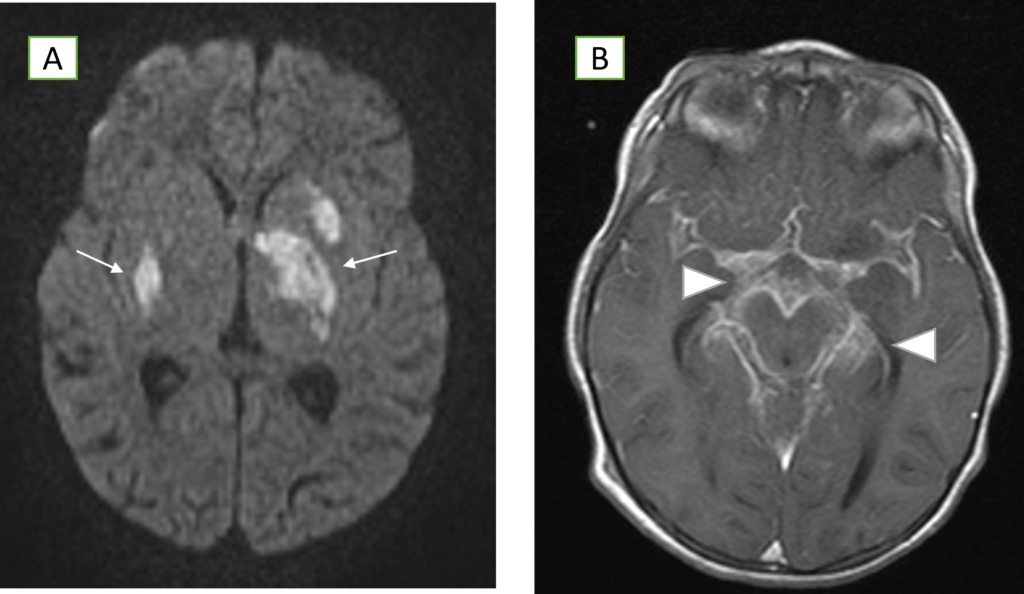 Figure C. Post-contrast axial image after 3 weeks demonstrating heterogenous enhancement in the regions of the previously noted areas of restricted diffusion, suggestive of subacute infarcts (arrows). There is moderate hydrocephalus of the lateral ventricles.
Figure D. 3D time of flight MRA of the brain demonstrates marked narrowing of the ACA and MCA’s bilaterally as well as the supraclinoid and cavernous segments of the ICA’s bilaterally. The posterior circulation demonstrates severe narrowing of the right vertebral and moderate narrowing of the basilar and left vertebral arteries. The PCA’s are not visualized bilaterally.

Even though microbiological confirmation would be ideal, therapy is empirically started with a combination of anti-tuberculous drugs that include isoniazid, rifampin, pyrazinamide and either amikacin or ethambutol. After the initial 2 months of treatment, therapy is usually narrowed to isoniazid and rifampin for an additional 10 months. Penetration into the CSF is limited for rifampin and absent for ethambutol and amikacin, resulting in a reliance on isoniazid as the most essential drug for TBM. Newer generation fluoroquinolones such as levofloxacin and moxifloxacin have optimal pharmacokinetic properties for TBM therapy based upon satisfactory susceptibility profile and excellent CSF penetration.12 However, despite their use in the pediatric population remains restricted due to their safety profile, they are valuable options for confirmed multi-drug resistant bacilli.

The use of corticosteroids was demonstrated to improve the outcomes of TBM in both children and adult patients,18 however, there are no randomized trials comparing different systemic steroid regimens. Some experts suggest doses between 8-12mg/day of dexamethasone for a duration of 3 weeks followed by a tapering regimen.

In the end, a multidisciplinary approach including surgical and neurosurgical specialties, rehabilitation services, and an epidemiological investigation led by the Department of Health is required for holistic management of TBM cases.

The prognosis of TBM depends largely on the patient’s neurological status at presentation and the time until therapy initiation. Poor prognostic predictors include hydrocephalus, altered level of consciousness, concomitant military tuberculosis, prolonged time to therapy initiation, and lack of steroid use.10 Mortality remains as high as 65-69% in developing countries or among patients with severe presentation, immunosuppressed state, and very young age. Among survivors, neurological sequela are reported in up to 50% of cases.8

Nowadays, when travel abroad and immigration processes are so common, physicians should maintain a high index of suspicion for TBM, given its high mortality and morbidity. The diagnosis might not be straight-forward during the first patient encounter, but the CSF characteristics, the neurological manifestations, the typical radiological findings, the molecular assays, and IGRA will help arrange the pieces of the puzzle. Therapy should be initiated immediately and administered for 12 months, despite the lack of confirmatory microbiological results. Finally, extra caution should be sought with children less than 2 years of age, given that they are the most susceptible when exposed to an active case of tuberculosis. Our patient survived, but faced the sequela mentioned above, including cerebral palsy, and developmental delay.