Depression is a risk factor for adult cardiovascular mortality with unclear pathophysiology. The literature on physiologic parameters related to depression is inconsistent and scant in adolescent patients.

Aim of the study

The purpose of this study is to determine if there is a relationship between depression and physiologic parameters including blood pressure (BP) and pulse rate (PR) in adolescents.

Psychiatric disorders are associated with pathological, physiologic, or subclinical evidence of accelerated atherosclerosis.1,2,3 Anxiety and depression, has been associated with an increased risk of cardiovascular disease.2,4-8 Evidence suggests that the risk of mortality is increased in patients with coronary artery disease who have comorbid depression.9,10

Mental health problems affect pathophysiological pathways with increased oxidative stress, inflammation, and autonomic dysfunction.12 Oxidative stress is related to the progression of CVD and, is also frequently increased in patients with psychopathology.11 Inflammation, an established known factor in the pathogenesis of CVD, was also found to have a bidirectional relationship with depression and childhood adversity.11,13 Also, depressed patients were found to have worse autonomic function compared to those without depression, and it is thought that dysfunction may result in many long-term complications, such as hypertension in young individuals.14 Therefore, the combined long-term effect of these different pathophysiological changes is hypothesized to enhance the progression of CVD in patients with psychopathology.11

Hypertension is a significant risk factor for CVD,15 and evidence suggests that it could be more common among patients with psychopathology.16 Therefore, hypertension could explain part of the long-known association between psychopathology and CVD.17 Studies investigating the association between BP and anxiety and depression have had inconsistent results ranging from a positive association,18 a negative association,19 or even a nonexistent association.20 The same level of controversy with even more scarce studies is found in the adolescent population.21

The purpose of this study is to further analyze the relationship between depression and BP or P in adolescents. The hypothesis is depression will be related to higher BP and PR.

Prior to data collection, approval was obtained from the Sacred Heart Hospital Institutional Review Board (IRB).

Inclusion criteria: This case-control study included patients over age of 13 years, who attended an Adolescent Medicine outpatient residency teaching clinic. Patients who were diagnosed with a depressive disorder were compared to a control group without a depressive diagnosis for systolic and diastolic BP percentiles (derived from CDC age and sex data) and pulse rates. The patients attended the clinic for various reasons including well child visits, sports physical exam, visits for acute medical or mental health problems. Patients from both groups were randomly selected from a three-year period 12/2015 to 12/2018. Diagnosis of depression was made by the same board-certified Adolescent Medicine subspecialist using the Diagnostic and Statistics Manual of Mental Disorder (DSM-V) criteria based on direct interview and assessment of function and distress with information provided by the Patient Health Questionnaire-9 (PHQ-9) score. Since this was a retrospective chart review, ID-10 diagnostic codes F32.0-F32.9, F33.0-F33.9 were used for search of depressed teens. Controls were those who did not have these codes.

A two-way type III ANOVA using normal scores transformed variables was used to analyze systolic and diastolic BP percentiles and pulse rates as dependent variables and sex (male/female), and depression status (depressed/non-depressed) entered as fixed factors. Transforming all data to normal quantiles or normal scores makes the tests nonparametric and less sensitive to any existing outliers in the data that may affect the outcomes. 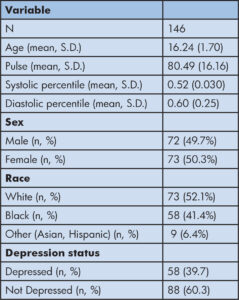 Finally, there was a significant interaction effect of depression and sex on pulse rate so that higher mean Pulse Rates were found in depression only among males but not females. (males depressed mean PR was 86.7 vs. males non-depressed PR of 72.1; F (DF 1) = 8.61, p =.003) (Figure 1a and Figure 1b). The statistical power (of the interaction test sex by depressed) for the only significant variable pulse, was found to be 85% using G*power.

A separate analysis was conducted addressing the potential influence of obesity and race on HR and BP percentiles and were not found to be statistically different between depressed vs. non-depressed groups. 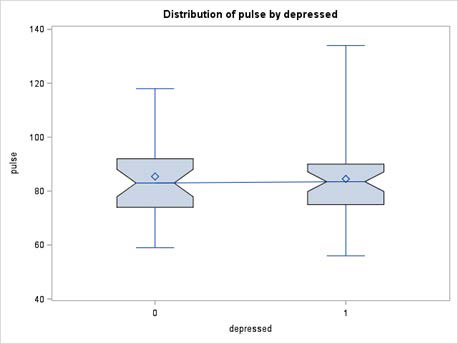 Figure 1 a. Distribution of pulse in females by depression status (NS) 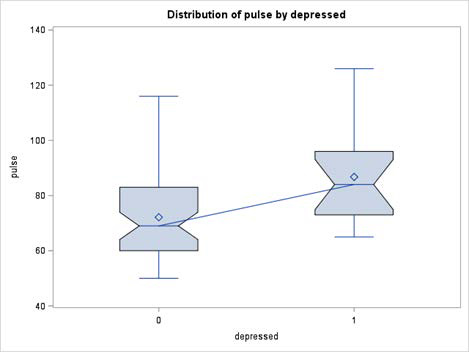 Figure 1 b. Distribution of pulse in males by depression status (p=.003)

In this study, significantly higher systolic blood pressure percentiles were found in depressed patients vs. non-depressed with no significant effect of depression on diastolic blood pressure. Our findings are in accordance with data from the British Whitehall II Study, suggesting that the risk of hypertension increased with repeated experience of depressive symptoms over time.7 The strength of that study includes the use of five waves of screening data of depressive symptoms and blood pressure, however, the patients’ ages ranged from 35 to 55 at baseline, and the findings were not significant in women.25

Other studies did not find the association between higher BP in depressed patients. Hildrum et al., found BP was lower in patients with depression.28 This finding was supported by subsequent longitudinal research (HUNT study) on the same population, even when those on medications for depression or hypertension were excluded.19 Of the proposed mechanisms to explain this association is a causative role for hypotension in the pathogenesis of depression through somatic symptoms and fatigue. A physiologic explanation for this association is that the central monoamine system may mediate hypotension and depression. In this system, altered levels of neuropeptide Y are thought to suppress sympathetic activity leading to a decrease in BP with depression.29

Such results are intriguing and contradict the hypothesis that hypertension plays a role in the association between psychopathology and CVD as mentioned earlier.17 These disparate findings are unexplained, but may involve differences in study populations. For example, comparing the HUNT study to the Whitehall study, the latter had a much higher proportion of nonwhite participants in which they reported higher odds for hypertension.19 Conflicting results could also be due to the different ways of defining hypertension as some studies have used self-reported hypertension instead of measuring blood pressure30, short periods of follow up20, different age groups studied30, or not accounting for confounding factors such as the use of antidepressants.20

Few studies pertain to adolescents. One of these is the Western Australian Pregnancy Cohort (Raine) Study, where an inverse association between depression and blood pressure was found in 14-year-old boys.22 This is in agreement with another prospective 20-year cohort study.21 To add to the confusion, Hammerton and coworkers31 found that lower systolic blood pressure could predict new-onset depressive disorders in high-risk children (offspring of mothers experiencing recurrent depression), but they also found that adolescents from the general population with higher blood pressure showed a higher risk of development of future depressive disorders.

Differences between studies could be explained by the differences in the study populations, population age, antidepressant or antihypertensive treatment, different means of assessing depression, and blood pressure recording methods. In our study, a significantly higher pulse rate was found in depressed males but not depressed female adolescents. This is a novel finding. A high heart rate has been associated with an increased risk of future CVD in the general population32 and is also found in patients with established CVD.33 It is hypothesized but still unclear whether the increased resting pulse rate plays a role in the association between CVD and psychopathology.34 Our results are in accordance with the FINE study where higher heart rate was found to correlate with depression in elderly men but was found not to cause subsequent cardiac events.34 However, the HUNT study reported only a weak cross-sectional association between depression and increased pulse rate.19 It is likely that complex interactions of environmental stressors and resulting physiologic responses may mediate this phenomenon.

The strengths of the current study included the study of adolescents which is an age that has not been well studied regarding depression and physiologic parameters. Blood pressure percentiles for age, height, and sex were used which is a more valid variable for analysis. The diagnosis of depression in this study was made by one board certified Adolescent Medicine subspecialist adding consistency and is derived from clinical data. The significantly higher depression rates among females versus males and in white versus other races (Table 2) in our clinic sample, represents the nature of our clinic and the population that it serves.

There are limitations of this study including the retrospective, case-control study design, and measuring data at one point in time with no long-term follow up. This is a preliminary study in a small group of patients attending an adolescent clinic.

Also, data to control for potential confounding variables known to cause secondary hypertension or elevated PR in children such as renal disease, cardiac disease, endocrine disorders, and certain medications was not included in the analysis nor was family history of hypertension included. Also, the reason for this visit was not included as a potential confounding variable. Other limitations are that this study was conducted in a single clinic which limits generalizability and that BP was measured with a single automated sphygmomanometer measurement and not a continuous ambulatory method.