A Unique Case of Persistent Dysuria in a Pediatric Patient

A 10-year-old, unimmunized female, developmentally appropriate child presented with a chief complaint of painful urination, which had been ongoing for 3-4 months. She had not been evaluated by a medical provider in 7 years as mother believed in holistic medicine. Patient was reported to be a previously healthy female who was not taking any daily medications. Her initial symptoms included dysuria, feeling of pressure while urinating, and a small amount of urine leakage on underwear. Upon initial evaluation at an urgent care clinic, her symptoms were thought to be due to ligamentous or muscular strain while overstretching in ballet. Therefore, she stopped ballet. However, as her symptoms persisted, the patient was taken to the local emergency department (ED), where she was treated for a urinary tract infection (UTI). Mother could not recall details of testing at the ED or the antibiotic given and records were unavailable. Despite treatment, there was no resolution of symptoms and she developed small specks of gross blood in her urine, noted in the toilet and on the toilet paper. Hence, she presented to our primary care clinic after 1 month of persistent symptoms. On assessment, patient denied a history of fever, abdominal distention or pain, flank pain, hypertension, edema, oliguria, urinary frequency or breathing difficulty. She reported urinating approximately five times daily. She had not yet started menarche. Aside from treatment received for a UTI during her recent ED visit, the patient denied a prior history of UTI. There was no family history of recurrent UTIs or kidney pathology. She reported no history of any preceding illness to her current symptoms. No abdominal trauma or trauma to the urogenital region was reported. Family history included a sibling with a history of rheumatic fever with mitral valve involvement.

On the initial day of presentation to the primary care clinic, her vital signs were unremarkable, with BP of 95/64 mmHg. Physical exam of the urogenital region was unremarkable. Urine dip stick showed specific gravity of 1.025, pH 5.5; glucose, bilirubin and, ketones were negative, with blood large, protein of 100 mg/dL, urobilinogen of 0.2 EU/dL; nitrites were negative and leukocyte esterase (LE) was large. Urine culture showed mixed flora with multiple organisms, each <10,000 colony forming units (CFU). No treatment was provided at this visit as UTI was unlikely based on the lab results. Follow-up was arranged to repeat testing and reassess symptoms. At follow-up, the patient continued to report hematuria and dysuria and similar findings were noted on urine dip stick, including large blood and large LE. Repeat urine culture also showed mixed flora with <10,000 CFU. At this point, a bladder ultrasound was obtained, due to persistence of large blood and the patient’s symptoms, which was interpreted as a complex, poly-lobulated mass arising from the dome of the urinary bladder and extending into the lumen, producing wall thickening, concerning for an invasive tumor such as rhabdomyosarcoma. The patient was referred to Urology for further evaluation. Due to a high suspicion for a malignant neoplasm, urology performed a transurethral resection of bladder tumor (TURBT) procedure. Pathology results revealed acute and chronic inflammation and partially denuded urothelium with edematous stroma indicative of polypoid cystitis. There was no evidence of malignancy. The post-operative course was uneventful, and at follow-up, the patient’s symptoms had resolved with no further recurrence. 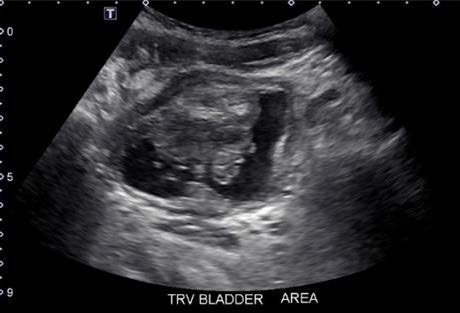 Benign bladder masses in children are extremely rare pathologic lesions.3 The presentation can include gross hematuria, dysuria or obstructive voiding symptoms, and urinary infection. There should be a high clinical suspicion for a neoplastic process such as rhabdomyosarcoma.4 Polypoid cystitis, although rare in the pediatric age, is now an acknowledged cause of childhood hematuria5, and should also be considered in a patient with persistent symptoms that are unresponsive to conservative measures or treatments.

Polypoid cystitis is a benign, reactive, exophytic urinary bladder mucosal lesion whose etiology has been attributed to chronic non-specific injury to the bladder mucosa, most commonly seen in adults.5 Friedman and Ash first defined the diagnosis of “polypoid cystitis” in 1959. The most well-known etiology of this condition is long-standing, indwelling catheterization.6 In addition to an indwelling catheter, other frequently cited etiological factors include vesical fistulae, radiation, tumors, and previous urological instrumentation. The location of the lesion, though it may vary, can aid in the differential diagnosis. Polypoid cystitis has mostly been observed on the dome and the posterior wall of the urinary bladder, an area in close contact with the catheter tip. Bladder tumors are known to be rare in these locations.6 A stepwise diagnostic approach should include urinalysis and culture, urine cytology, and imaging studies. The anatomy should be initially defined with renal and bladder ultrasonography followed by a voiding cystourethrogram (VCUG). Based on the absence of hydronephrosis in our patient, there was no indication for the VCUG. Contrast CT or magnetic resonance imaging can help define the lesion further, and cystoscopic inspection with attempts at transurethral biopsy should be the primary mode of obtaining a tissue diagnosis.4 The usual treatment for polypoid cystitis consists of removing the source of irritation and surgical excision in the rare severely involved cases.5

In summary, when a polypoid lesion is found within the bladder of a patient, regardless of age and regardless of an indwelling-catheter or chronic source of irritation, polypoid cystitis should be considered as a potential etiology.

Review of the current case highlights the importance of considering a rare, in the pediatric population, but prevalent adult benign bladder mass noted with polypoid cystitis. This case will also allow Pediatricians to broaden differential diagnoses when evaluating persistent dysuria in a patient without significant urological abnormalities. Early diagnosis and treatment can ameliorate symptoms.