A Teenage Male With Sore Throat and Fever

Acute promyelocytic leukemia (APL) is a subtype of acute myeloid leukemia (AML) characterized by t(15;17) with formation of the PML-RARA fusion gene. APL most commonly presents with complications of pancytopenia including fatigue, weakness, infections, and bleeding. An ominous feature of APL is its predilection for disseminated intravascular coagulation (DIC). This case introduces pharyngitis and pharyngeal asymmetry as presenting features of APL in a 19-year-old male.

A 19-year-old immunized black male with history of attention deficit hyperactivity disorder presented to his primary care physician (PCP) for evaluation of sore throat, trismus, and dysphagia of three days duration. The patient was afebrile at the time of evaluation and the rest of his vital signs were normal for age. On exam, the patient’s right tonsil was noted to be slightly larger than the left tonsil. There was no other palatal asymmetry or uvular deviation. Rapid Strep and SARS-CoV-2 polymerase chain reaction tests were negative. A throat culture was sent which later showed no growth.

Supportive care and return precautions were discussed. He returned to his PCP two days later for evaluation of worsening sore throat, voice deepening, and fever to 38°C. The patient also noted gingival bleeding with teeth brushing over the preceding week. Upon reexamination, there was marked posterior pharyngeal erythema and the right tonsil was significantly larger than the left tonsil. The uvula appeared edematous and obscured a large portion of the patient’s airway. Right mandibular swelling and right tender submandibular lymphadenopathy were noted.

The patient was referred to the emergency department (ED) for evaluation of suspected right peritonsillar abscess with concern for airway compromise. Neck computed tomography (CT) scan in the ED was significant for profound uvular, tonsillar, supraglottic, epiglottic, and retropharyngeal edema with right-sided reactive lymphadenitis. No abscess or drainable fluid collection was visualized.

The patient was admitted to the pediatric oncology service and began differentiation therapy with all trans-retinoic acid (ATRA) and arsenic per AAML1331 protocol. He was also started on cefepime for febrile neutropenia and received two units of packed red blood cells and two units of platelets for anemia and thrombocytopenia, respectively. Fluorescence in situ hybridization analysis later demonstrated the characteristic APL PML-RARA fusion gene formed by t(15q;17q).

Approximately fourteen hours after admission, the patient complained of a headache and worsening throat pain. Upon evaluation, he was diaphoretic, with an unsteady gait and erratic eye movements. He also exhibited fluctuating mental status, at times responding only to painful stimuli. Elevated blood pressures and bradycardia raised clinical suspicion for increased intracranial pressure. Due to concern for brainstem herniation, the patient received hypertonic saline and mannitol. Glasgow Coma Scale score declined from 12 to 8, and the decision was made to intubate. Due to significant airway edema and oozing of blood, the patient was intubated on the fifth attempt by Pediatric Anesthesia. STAT head CT after securing of the airway revealed an acute left cerebellar hemorrhage with blood in the fourth ventricle, as well as upward transtentorial herniation, left tonsillar herniation, and obstructive hydrocephalus (Figure 2). Pediatric Neurosurgery was consulted but did not pursue surgical intervention in the setting of presumed disseminated intravascular coagulation (DIC). The suspicion for acute DIC was evidenced by worsening elevation in prothrombin time (PT) to 19.3 sec (normal reference: 9.1-13.5) and international normalized ratio (INR) of 1.6 (normal reference: 0.8-1.1), elevated D-dimer, low fibrinogen, and continued anemia and thrombocytopenia despite repeat transfusions. The cerebral edema ultimately improved with medical therapy, and the patient was extubated on the fourth day of hospitalization. 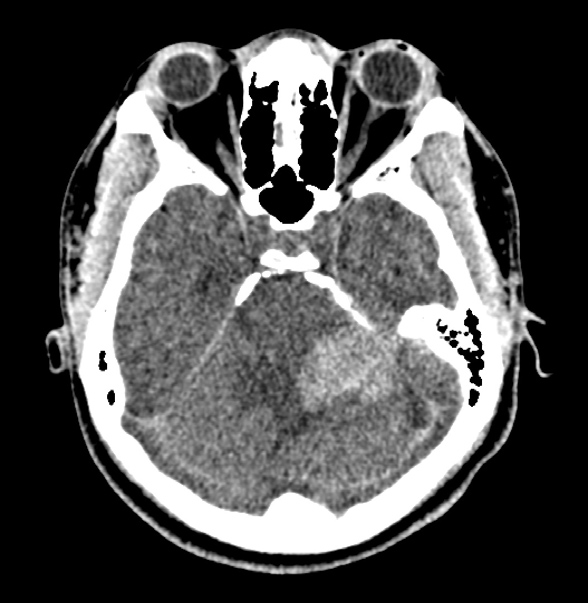 Acute promyelocytic leukemia (APL) is a variant of acute myeloid leukemia (AML) formerly described as AML-M3 that has an incidence of 0.27 per 100,000 people in the United States and accounts for an estimated 10-15% of adult AML cases.1, 2 Within the U.S., APL most commonly affects whites, Hispanics, and Asians, with a lower incidence among blacks.3 There is no sexual predilection.3

APL has a high rate of early morbidity and mortality due to severe hemorrhage in the setting of pancytopenia, enhanced fibrinolysis, and a proclivity for DIC.4 The incidence of early mortality is approximately 20%.5 The majority of patients present with complications of pancytopenia, including fatigue due to anemia, infection due to neutropenia, and ecchymosis, epistaxis, gingival bleeding, or menorrhagia due to thrombocytopenia.

This case describes an unusual presentation of APL. Sore throat is a common complaint in the pediatric clinic and rarely prompts clinicians to investigate beyond initial swabs and point-of-care tests. In this patient with pharyngitis and pharyngeal asymmetry, peritonsillar abscess was initially suspected. It was only after obtaining further labs and imaging that malignancy entered the differential diagnosis. This case also emphasizes the importance of a detailed history, as knowledge of the patient’s easy bleeding is suggestive of a more complex process than acute infection alone.

A propensity for bleeding is common with APL, and the patient in this case developed a severe intracranial hemorrhage with resultant tonsillar herniation secondary to DIC. Despite initiation of early treatment with ATRA, the risk of hemorrhage remains high and must be monitored for carefully. His cerebellar hemorrhage-induced cerebral edema was managed medically due to thrombocytopenia and coagulopathy precluding surgical intervention.

The patient was treated with ATRA and arsenic. He is currently continuing treatment in the outpatient setting and has no residual neurological deficits.